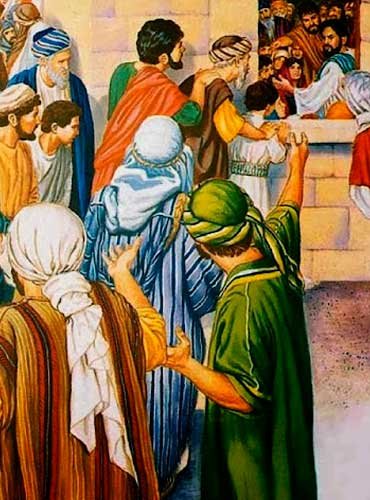 Tuesday of the Third Week in Ordinary Time – Mk 3:31-35
Today’s Gospel from Mark presents us with a compelling scene: as Christ is preaching, His Mother, sisters, and brothers show up and ask to see Him. Christ responds by asking who His relatives truly are, and giving the strong line, “Whoever does the will of God is my brother and sister and mother.” There is a lot that we could say about this passage: first, the term used for brothers and sisters is a broad one, and can mean cousins or more distant relatives than brothers or sisters. It doesn’t mean that Mary had other children and, indeed, we know from tradition that she didn’t. Nor is the phrase an insult to Mary, since she always did God’s will, and so not only was she Jesus’ mother in the physical sense of the word, since she gave birth to Him, but she was also most perfectly his mother according to His words here.

What really grabs our attention, however, is the power of those words: “Whoever does the will of God is my brother and sister and mother.” In large families, the siblings all tend to resemble each other physically, so much so that you can often recognize someone as a member of the family even though you’ve never met them before. To be Christ’s brother or sister is to be very close to Him, to resemble Him. This conformity comes about because we follow Christ’s example, since He said He “came down from heaven, not to do His own will, but the will of Him who sent Him,” (Jn 6:38), His heavenly Father. To be His mother is an even greater honor. The Blessed Virgin Mary is Christ’s mother, since she gave birth to Him; she brought Him into this world so that He could save it. When we do God’s will, we become Christ’s mother because we make Christ present again wherever we are; to do God’s will is to perpetuate Christmas in daily life.

We can ask ourselves: how willing are we to submit ourselves to God’s will as expressed in things like the schedule, in our offices, in our obedience in the little things? Do we try to do our best, or do we constantly make excuses and convince ourselves that we’re doing what’s right, or that what we are doing is more important than God’s will?
“To obtain this grace [of uniformity with God’s will], we should invoke the assistance of the saints . . . and most of all our Mother Mary. She is the most perfect of all the saints because she most perfectly embraced the will of God at all times.” Through her intercession, let us ask for the grace to embrace God’s will in everything.