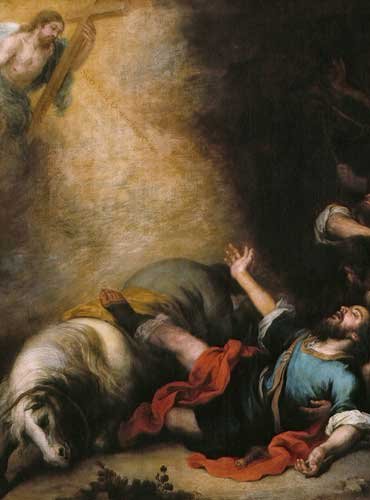 Today we celebrate the feast of the conversion of Saint Paul. It’s the only liturgical celebration of a conversion that we have in the calendar, and so it’s worth considering first, our own conversions, and, second, our prayers for the conversions of others.

Again, since today’s feast is the only one dedicated to a conversion, it’s worthwhile to consider the way Saint Paul viewed that event, and apply that vision to our lives. One thing that stands out is how often he refers to it: in the Book of Acts the event is recounted in its entirety three times (9:1-19, 22:3-16, and 26:4-18), once in the third person, and twice by Paul himself, and Paul makes reference to the event in five of his letters: Galatians (1:13-16), 1 and 2 Corinthians (1 Cor 15:8-10 and 2 Cor 4:4-6), Philippians (3:4-11), and 1 Timothy (1:12-16). In other words, the event was constantly present in Paul’s mind, and he often uses it to recall God’s mercy towards him. For example, in 1 Cor, after recalling his conversion, he adds, “I am the least of the apostles, not fit to be called an apostle, because I persecuted the church of God.” However, he doesn’t just leave it there, but adds: “But by the grace of God I am what I am, and his grace to me has not been ineffective.”

This reminds us of the Spiritual Exercises, and the meditation on our own sins. To recall our own sins keeps us humble and reminds us not to trust in ourselves; as Saint Philip Neri used to pray, “Lord, beware of Philip, today he might betray you.” However, we must also see our sins in light of God’s mercy, a mercy that pulled us out of them and called us to this life, as “unfit” as we might consider ourselves for it. These are, of course, reasons to be thankful to God.

Secondly, Saint Paul’s conversion gives us hope when we pray for the conversion of others. Regarding this, Fulton Sheen writes, “I’m sure that many of the members of the Church in those days must have prayed that God would send a good coronary thrombosis to Saul. They must have said, ‘Dear Lord, send us someone to answer Saul.’ God heard their prayers. He sent someone to answer Saul. He sent Paul. . . .  ”

That conversion from Saul to Paul, however, only came through grace, and, in particular, the grace obtained through Saint Stephen. In a sermon on Saint Stephen, Saint Fulgentius of Ruspe comments that it was Stephen’s love that paved the way and paid the price for Paul’s conversion: “Love was Stephen’s weapon by which he gained every battle; his love for his neighbor made him pray for those who were stoning him, to save them from punishment. Strengthened by the power of his love, he overcame the raging cruelty of Saul and won his persecutor on earth as his companion in heaven. In his holy and tireless love he longed to gain by prayer those whom he could not convert by admonition. Now at last, Paul rejoices with Stephen. Stephen went first, slain by the stones thrown by Paul, but Paul followed after, helped by the prayer of Stephen. This, surely, is the true life, a life in which Paul feels no shame because of Stephen’s death, and Stephen delights in Paul’s companionship, for love fills them both with joy. It was Stephen’s love that prevailed over the cruelty of the mob, and it was Paul’s love that covered the multitude of his sins; it was love that won for both of them the kingdom of heaven.” This should give us hope as we continue to pray for the conversion of our family members, friends, and those who hate and persecute the Church.

Let us ask, through the intercession of Mary, Queen of the Apostles, and Saint Paul, for the grace of gratitude at our conversions, and perseverance in turning towards Christ with all our hearts.