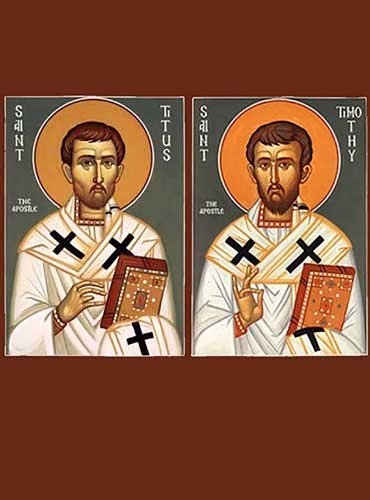 Yesterday we celebrated the feast of the conversion of Saint Paul, and today, we celebrate some of the fruits of that conversion, as it were, by celebrating the memory of two of Paul’s disciples: Timothy and Titus. Today’s first reading, taken from the beginning of Paul’s second letter to Timothy, contains the Apostle’s advice to his disciple, and we can apply two pieces of that advice to our own lives and vocations: first, the need not to become discouraged or afraid, and, secondly, the remedy for the difficulties that we might face.

First, we can see from Paul’s letter the need not be let ourselves be discouraged or become frightened by anything, be it our circumstances, our failings, or anything. Paul’s letter has a joyful tone as he exhorts Timothy to live out his vocation. We can easily forget that Paul is writing the letter from prison awaiting his hearing and sentence, and Timothy is not in an easy situation either, as we can tell from Paul’s first letter, wherein the Apostle to the Gentiles mentions Timothy’s health, the different errors running around, the problems of the rich, people sinning publicly, and problems with the presbyters, among others. In addition, Timothy must’ve had an interesting family: it’s nice that Paul mentions his grandmother and mother, but we’re told in Acts (16:1) that while Timothy’s mother is Jewess and a believer, his dad is a Greek Gentile, with the implication that he doesn’t believe in Christ. Yet, what Timothy has in spite of all these problems is “a sincere faith” – the word sincere, ἀνυπόκριτος (anupokritos) means free from selfish motives, with nothing phony.[1] Even if he doesn’t understand God’s way, or know how much longer he will have to endure his sufferings, Timothy “knows in whom He has believed” and trusts (2 Tm 1:12). Paul tells us that the spirit of cowardice isn’t from God; nor is the spirit of fear. The spirit of faith is what comes from God, and it encourages us to move forward.

In difficult moments, sometimes our faith can grow sluggish, especially when the difficulties and discouragements start to mount. Paul gives Timothy the remedy: “stir into flame the gift of God.” Literally, it means “to bring the fire to life again,” to go back to the beginning and start over again. This is an essential part of the spiritual life, and many of the saints bear witness to it. Writing in a letter, Saint Elizabeth Ann Seton put it this way: “The heart down–discouraged at the constant failure in good resolution; so soon disturbed by trifles; so little interior recollection and forgetfulness of His constant presence. The reproaches of disobedience to the little ones much more applicable to myself. So many Communions and confessions with so little fruit often suggest the idea of lessening them– to fly from the fountain while in danger of dying from thirst.”[2] Fortunately, a priest gave her the same advice Paul gave Timothy, telling her: “Begin again today, my child. What is lost must not cause dejection. What you have gained [spiritually] will be lost if you do not begin again as if nothing had been done.”[3] “Begin again today, my child.” That spirit of faith, Saint Paul tells us, gives power to overcome obstacles and work miracles, love to care for others, and self-control or prudence and docility to God’s will.

Through the intercession of Mary, Mother of Faith, and Saints Timothy and Titus, let us ask for the grace to not grow discouraged, but to constantly start over as many times as needed until we grow in virtue and become saints.

[1] HELPS Word-studies 505 anypókritos: (an adjective, derived from alpha-privative 1 /A “not” and 5271 /hypokrínomai, “to act as a hypocrite”) – properly, not a phony (“put on”), describing sincere behavior free from hidden agendas (selfish motives) – literally, “without hypocrisy” (unfeigned).